In the end, it wasn’t the mountains that defeated us, although they were endless, as promised. It was the cold.

Victor and I set out to accomplish this ride together. Although we did the qualifying rides on single bikes, we decided to get a tandem for the 1240. We found the Burley on Craigslist. We took it for a spin and loved it right away. There were a few things we had to learn, but for the most part, we were in sync and found a great new way to ride. One of our local club members describes us as a “lunar module” as we rocket away on our tandem. We found we could even climb hills fast. We did the Harlem Valley century with 9000 feet of climbing in just over 6 hours. So, as we planned for the Endless Mountains ride, we expected success.

Instead, as we started the early climb over Fox Gap, Victor looked down at the speedometer and saw trouble. He didn’t say anything, because he thought I was doing my best. Maybe I could have pushed harder, but I didn’t realize we were going so slow. I don’t have a speedometer on the back of the tandem, so there is no way to know. I was not pushing as hard as I had on our training rides, mostly because I knew there were days of riding ahead and also because I had a cold and didn’t want it to blossom into something worse.

Then, our chain broke. I watched with admiration as he expertly used some tools and handy rocks to put the thing back together. He did a good job too, because it held together for the many thousands of feet of climbing to come. Victor had spent hours getting the brakes and gears just right, finding a generator hub and rigging lights. It was a work of art, but one that weighed well over 150lbs. Although we continued on, Victor was starting to think that we had made a big mistake. We stopped at one point so that he could get a Red Bull and he shared his thoughts. I was surprised and told him we should just keep riding and try and enjoy ourselves, but he was not a happy rider.

I was bitterly disappointed when he told me he thought we should drop out at the overnight controle. He said we were going too slow and would not be able to get enough rest. I didn’t want to give up. I pointed out that we were hundreds of miles from our car, with no way to get back. I pointed out a few other things that I will not share, but suffice it to say, he agreed to continue and I determined to push harder.

Looking back, this challenge to our relationship was more important than any bike ride. Victor got back on the road with only a few hours of sleep and was cheerful all day. He found some reserve of energy that he didn’t know he had. He started to point out interesting things along the way. As we climbed hill after hill, I pushed as hard as I could and we laughed and sang and had a great time even though it rained most of the day. We chatted with other riders and shared stories. We rode with Nick for a while and he told us about the Burley he rides with his wife. Roger was another friend we made along the way. He came from Brasilia to do this ride and had some major setbacks the first day, but soldiered on. Henk from Montreal and Vick from Seattle rode up some hills with us. Al from California and Dan from Missouri were great company.

The most memorable episode of the ride came late the second night, as we had just descended a 20-mile hill in the bitter cold to find an open tavern with rando bikes parked outside. We were frozen and exhausted. But, inside we found hot coffee and soup; a coal fired stove and cheerful fellow riders. For the rest of the night, we rode together in a group and tried to keep each other awake. I was actually thankful for the hills, as they gave me a chance to warm up. Although I had on many layers of clothing, as well as hand and foot warmers, I was painfully cold. There was nothing to do but ride on. There were no stores or cars and few houses. At one point we found ourselves getting ahead of the others and I was afraid. We were both very tired and the cold just made us want to sleep. I asked Victor to stop because I needed a hug. We repeated the hug break several more times over the next few hours.

Finally, at about 3am we arrived at the overnight controle. I listened to the others make a plan for the rest of the ride: Leave at 5:30am, ride 24 hours to the next overnight control, rest for an hour and set out for the last day to ride another 17 hours or more. I knew then I couldn’t go on. I could feel the cold moving from my head into my lungs and I could not bear the thought of riding through another night of freezing rain and wind. Apparently, Victor’s only concern was that I would be too hard headed to stop. But this time, I didn’t put up a fight. I was ready to give up.

After a day of sleeping, drinking fluids, taking a walk, sitting in a hot tub, sleeping some more, I sit down to write this with mixed feelings. I am disappointed, but I know we made the right decision. I love to ride, but this time, the risk was too great. I love my life more. And, I want to keep riding. Whatever happens, we have no regrets, and lots of wonderful memories.

I was impressed by your will power already on the first day. As I left Hallstead back to Ithaca, feeling cold inside my car I could only imagine how it must have felt on a bike. I am sure you and Victor will learn from the experience and successfully complete a 1200K next year. It was awesome to see you both on a tandem.

Congratulations on your combined
attempt to complete this very difficult ride.Most importantly, congratulations on being able to make the decision to stop without regrets. Fantastic to have the opportunity to learn so much in so little time.

The only thing worse than trying and not succeeding is failing to try.

I knew this was going to be a very tough event, and that everything would have to go right to succeed. I also caught a mild cold a week before, so I was maybe only at 90% power, but still thought "Maybe I can still finish in time ...". Then the knee started having problems, and that's what took me out of the running, oh well.

I think you should be happy to have done so well in such a tough event.

With more training time on the tandem, you'll get to the point where you can stand in sync, without even realizing you're doing it, just the same as on a single. That'll help with speed on the hills. And with more experience riding together, you may grow more comfortable with letting the tandem rip on the downhills, where you can really make up a lot of time.

If you ever have a chance to ride with Crista Borras and Chuck Woods then you'll see true tandem masters at work :-) Jan and I have learned everything we know about tandeming from C&C.

I want to try the 1000km next year. It's in August, so chances are it will be warmer. I would also like to try and do a flesch and some more 12 and 24 hour races. I can get stronger and better- it will just take some hard work.

Great Crazy Randos! Congratulations for the DNF. Yeah!!! We must be proud of it, that´s what I call DNFing in a First Class basis hehehe.

It was an unforgetable experience to ride in such marvelous and scenic roads and being part of the Top USA Randonneurs family, in their epic EM´s journey. Uahhuuu!!! - What a great experience! Two tumbs up! Hugs for my simpathetic tandem couple.

I hope to give it a try again, if i could escape from the sanatory that my wife is intending to put me or if the ECT (electric shock) does not work with my ciclopathic mind.

You guys got a terrible break with the weather, that route is just brutal anyway! I did the 1000k last year on tandem with Mary Crawley and came within an inch of stopping in perfect weather.

Hope you continue on the tandem, it is a great nutjob challenge!

I'm glad you are able to accept the DNF and move on. This will make you more determined in the future rides. Although I finished the ride. It took every bit of me to complete it. Consider that Henk and I were 2 of the first 5 finishers on The Last Chance 2 and half weeks earlier, and we were the Red Lanterns on this ride. It shows that the difficulties of this ride was beyond imagination. HC!! If not for the encouraging words passed on to me from Tom, I would had also DNF at Mifflintown after riding though the torrential rain storm. The moments we spent inside that Tavern and the remaining segment of the ride to Lamar were specail and unforgettable. Those are the moments I cherish as Randonneur. Hope to see you in the future event.
Albert from California

I believe you refereed to me, Vince, not Vick-I am from Bend Oregon, but here was another Vincent from Seattle. I remember riding with you a the first part of the first day and a little on the second day. I am very impressed with your effort. I love to see tandems on Brevets. My wife has no desire to ride more than 8 hours a day on our tandem so all distances, except maybe a 200K are on my single. 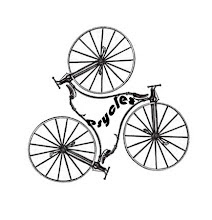 May the road rise up to meet you. May the wind be always at your back. May the sun shine warm upon your face and the rain fall softly somewhere else. Until we ride again, may God hold you, and your bicycle, in the palm of his hand.